The artisan of fresh pasta

The term craft is often associated, rightly, with that of tradition. For the Sacchetto family, it is in Turin, Italy, that this tradition became a way of life. Giancarlo's father produced fresh pasta there entirely by hand. From the age of 12, Giancarlo would lend him a hand.

"I liked the products, the manufacturing process. It was a demanding job, but fascinating, "he says, before sharing with us the excitement he felt when a very first ravioli machine arrived at the factory, saving the employees many hours of hand shaping.

Fallen into the pasta

In 1975, the Sacchetto family immigrated to Montreal. Giancarlo's father had not planned what he was going to do in his adopted country, but the call for fresh dough sounded, so that in 1976 he set up a small craft shop on rue Charland known today to many Montrealers: La Maison du Ravioli.

The Pastificio Sacchetto boutique opened in 2005

The craftsman in Giancarlo was happy on Charland Street, but the entrepreneur who lay dormant in him often wondered, while passing through Little Italy, why there was no artisanal factory of fresh pasta on the spot. So when he heard of renovations at the Jean-Talon Market, he jumped at the chance and presented a business plan to the corporation.

The Pastificio Sacchetto boutique opened its doors in 2005 and has since offered a range of fresh pasta made in the purest Italian tradition. Spaghetti, ravioli, tortellini, capelletti, cannelloni, medaglioni, fettuccine ... The choice is vast, but the craftsman's know-how is unique.

In the space of 15 years at the head of the Pasticio Sacchetto, Giancarlo has seen the tastes of his customers evolve. He is very happy to meet young people there whose grandparents and parents came to buy at La Maison du Ravioli. He is also proud that his meat-stuffed pasta is still so popular.

A real neighborhood institution to come and visit!

A true institution, this traditional pastificio factory offers a selection of long pasta, in sheets and in various shapes, all made on site in its laboratory visible to all.

This is where Giancarlo Sacchetto is waiting for us to share the secrets of his technique, passed down from father to son. "Making good pasta is like using top quality products," says the owner of this small market business Jean-Talon. Giancarlo masters his material on the tips of his fingers: he fell into it small.

It is the dream that Giancarlo and Andrée Sacchetto realize in the heart of Little Italy in Montreal.

At the Jean-Talon market, we have developed an original concept where production is done on site, in full view of the customer. Products are sold in bulk in a wide range of flavors.

Our specialties include ravioli and cheese or meat tortellini, medaglioni stuffed with ricotta and meats, cappelletti, cannelloni, potato gnocchi and tagliatelle. 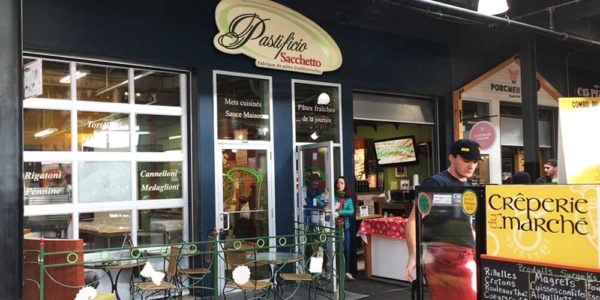